Victoria Park, the spa and health club in Westmount, has opened a fabulous new facility in the Golden Square Mile. Housed in a restored Victorian mansion on de la Montagne, it features bay windows, raw and white painted brick walls, and an impressive art collection including a dramatic life-size sculpture, Bill Starke’s Skydiver III, hanging from the ceiling above the magnificent staircase.

The setting is quite intriguing as one considers: Surgery, Botox and filler, or zappy lasers?

Kidding. But it is a lovely environment.

The new medi-spa, with plastic surgeons, dermatologists and technicians on staff, offers injections and lasers on site. There is a Pilates studio – the main VicPark branch in Westmount is a full-service fitness facility – and sparkling treatment rooms, blending old and new beautifully. 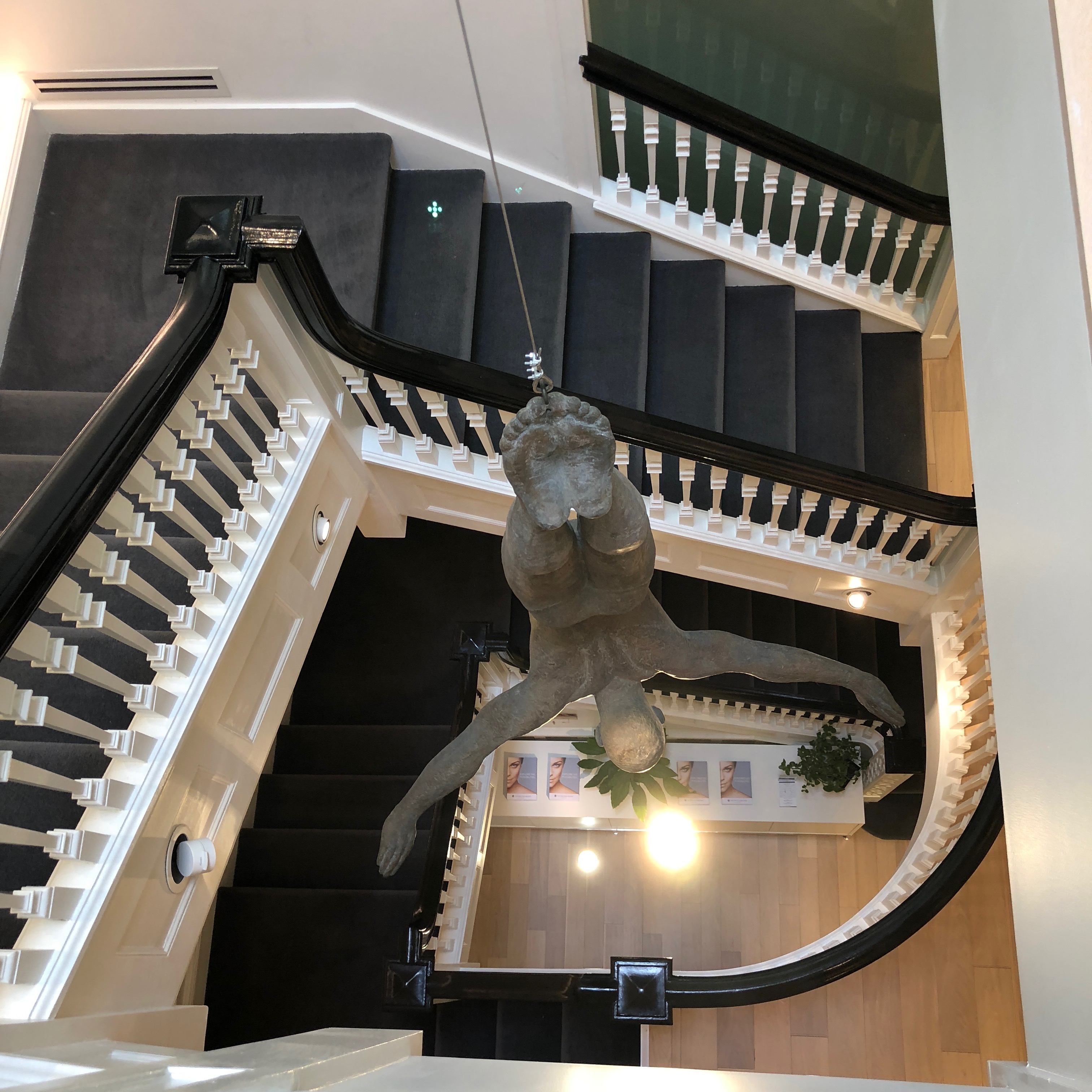 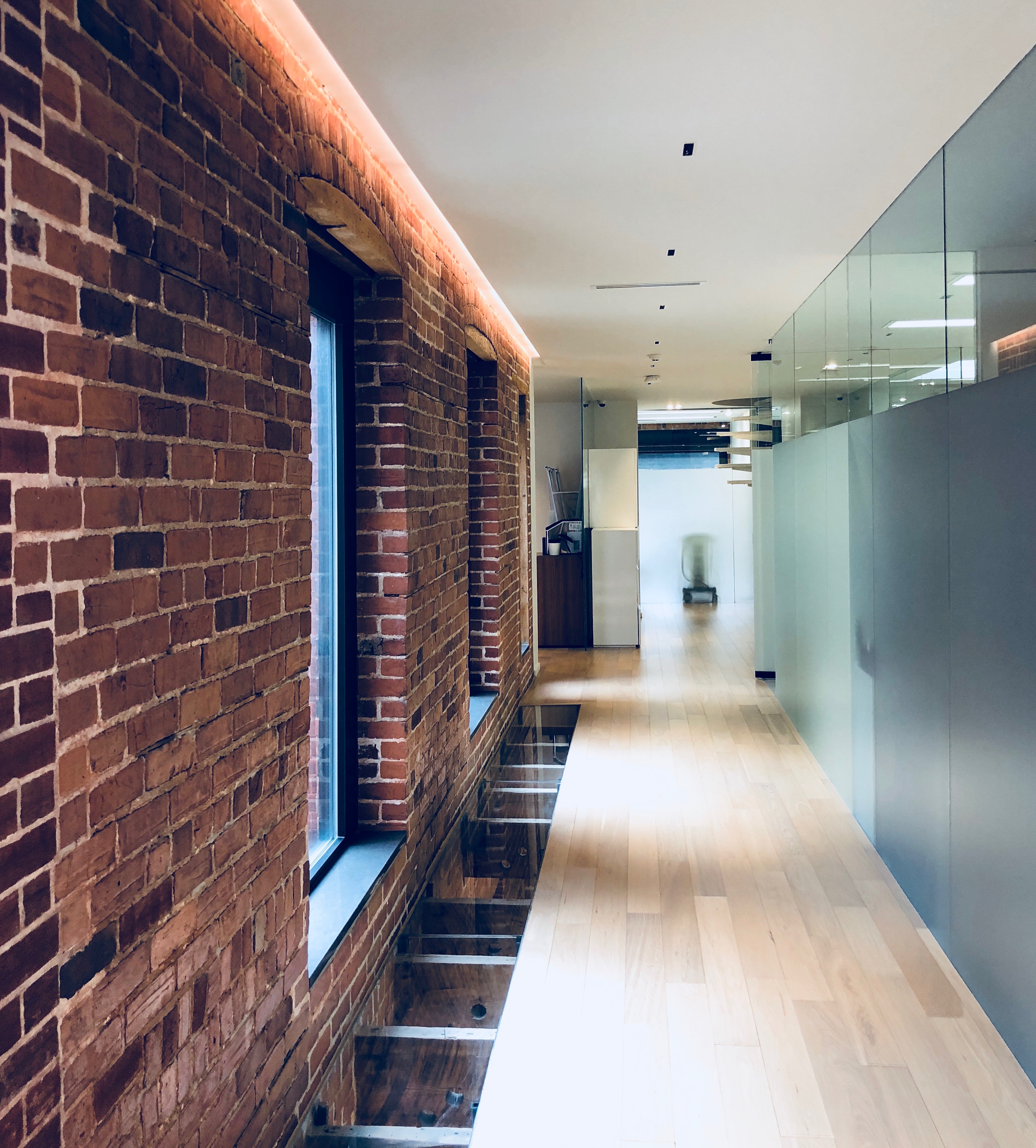 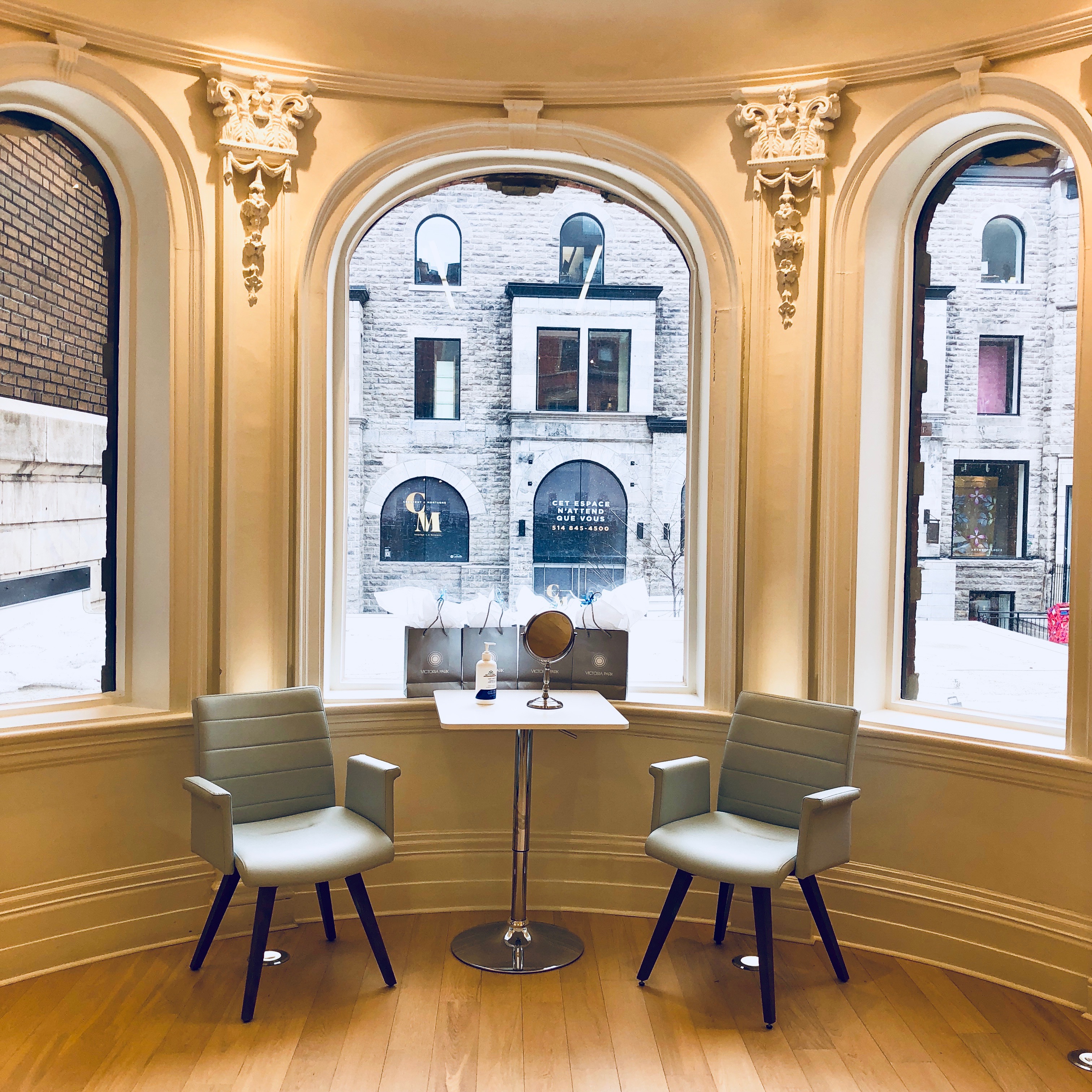 The bay window looking out on to de la Montagne.

There are three criteria for evaluating what treatment is right for you (and me): Cost, effectiveness and degree of invasiveness you are willing and able to tolerate.

Surgery is the costliest and most invasive, and injections are – generally – next. But what about those new lasers that promise to smooth skin and wrinkles, brighten dark spots and zap red lines?

At some point, a surgeon might tell you that the facelift is the most cost effective. That  $15,000-plus treatment will last 10 years and lift chin line and hooded eyelids with an efficacy other methods can’t achieve. Injections can cost more than $3,000 a year if you’re going the full monty on filler. But you walk out of the clinic with almost no downtime. Still, after five years you’ve spent the surgery budget – and you still want to keep lifting and firming and smoothing.

As for lasers, they, too, can be expensive. What’s more, how to figure out what they actually do and which does what.

Vic Spa offered me a treatment – and a course on the latest technology. After discussing  my concerns – brown spots on face and hands, saggy face – with technician Edith White, she suggested Forever Young BBL, an advanced laser treatment.

The laser works on the interior structure of the skin, she said, which surgery doesn’t. “The two are complementary,’’ White said. 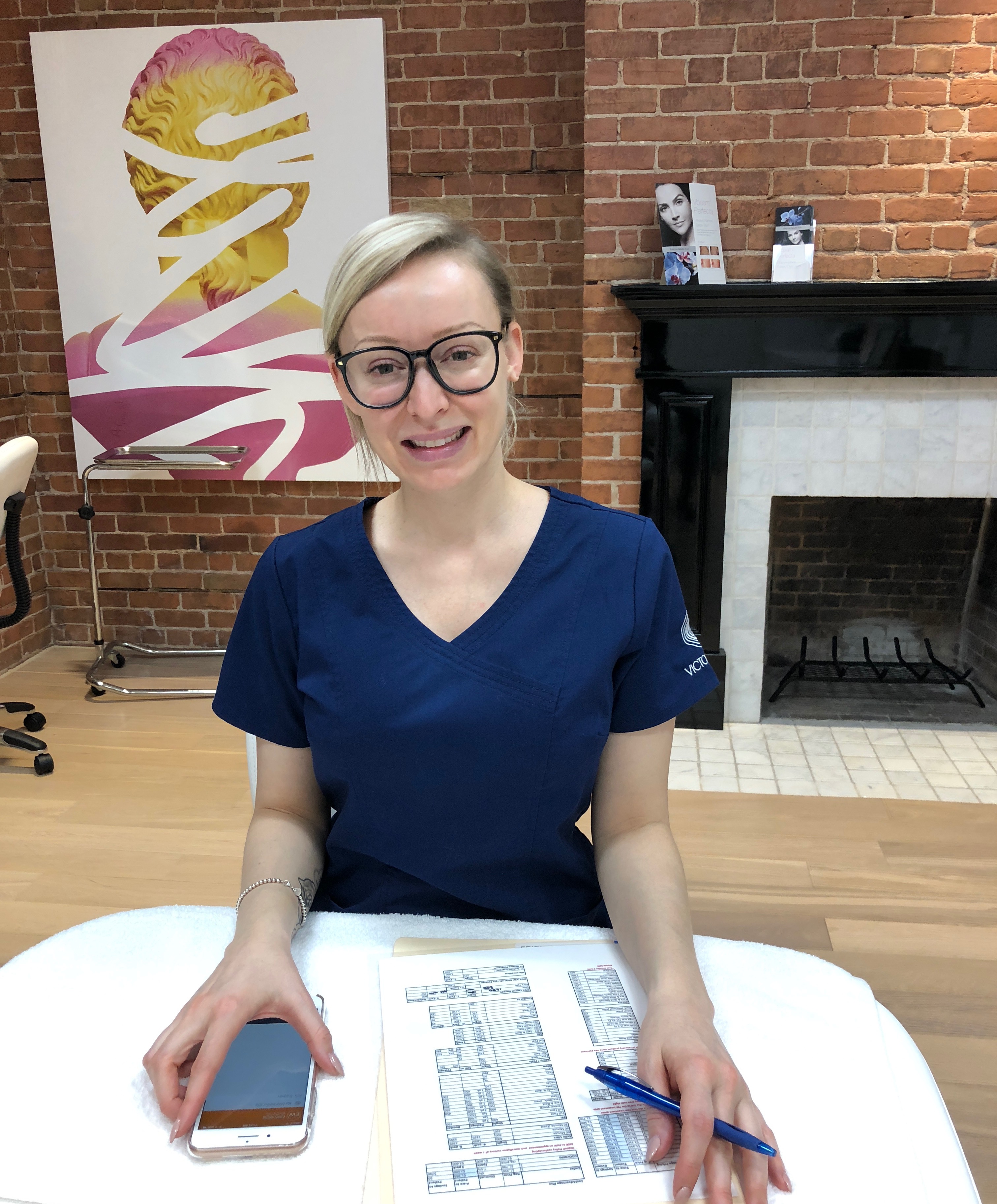 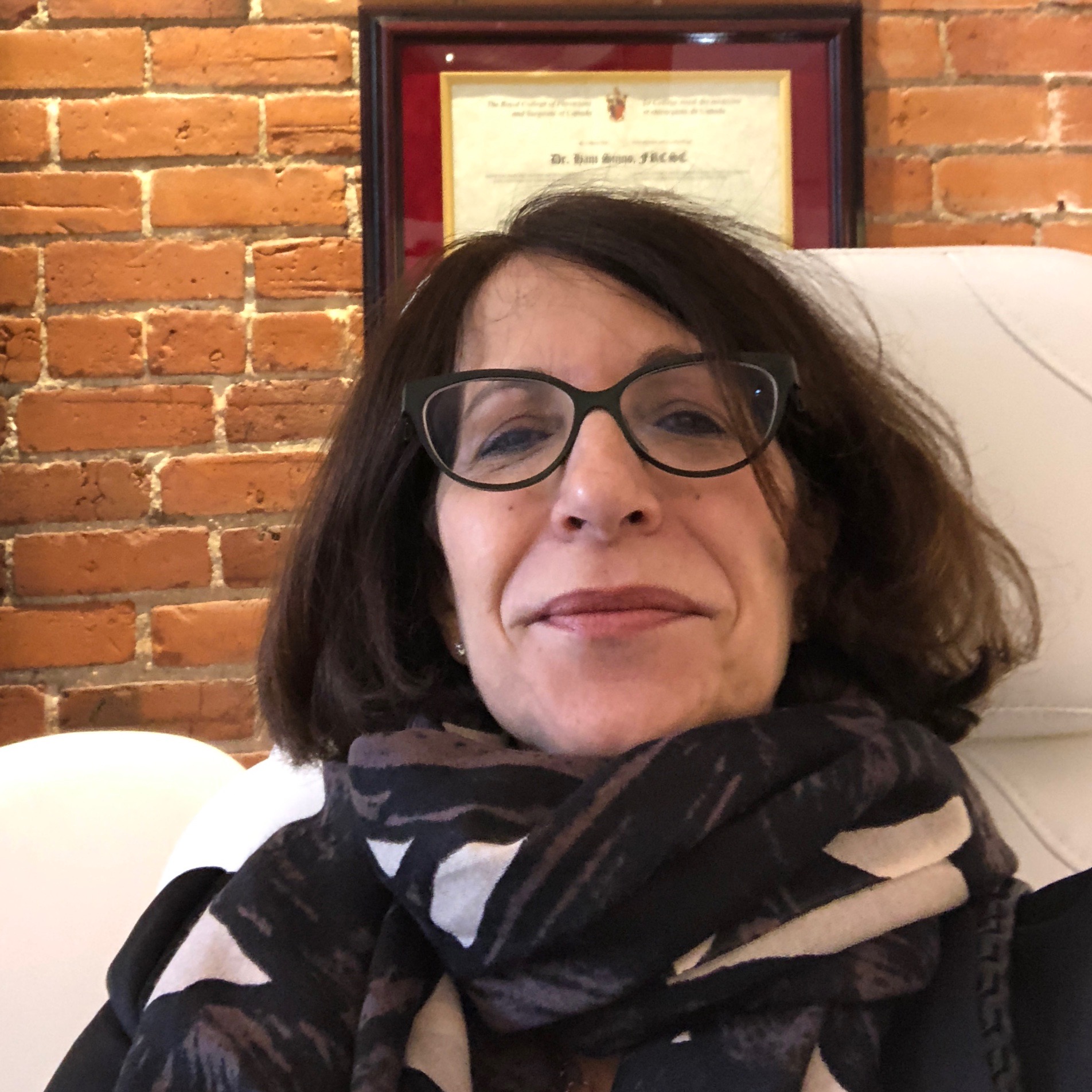 Lasers like IPL, originally used for hair removal, have been around for 20 years, said Jeff Hart, managing director of Victoria Park. BBL is the latest generation of laser tech.

“Research shows it changes the genetic code of the cells that express aging,’’ he said. BBL works on fine lines, wrinkles, pigmentation, brightness and tone, he said.

A series of three treatments over about six weeks is the starting point, with an annual maintenance program of three to four treatments.

After my one treatment, dark spots were lighter and my skin seemed somewhat firmer. Those pesky red veins around my nose disappeared but returned after a month or so.

V Beam is more effective on veins, and fractional laser – which makes microscopic holes in the skin and is more invasive – is best for deep pigmentation, Hart pointed out.

The treatment was not painful, but a little weird, especially the deep laser throbs that work on firmness. It was over in about 20 minutes, and I walked out with no down time at all, but with a good slick of sun protection.

As impressive as the new facial treatment lasers may be, Hart says that the past year has brought big breakthroughs, in the treatment of cellulite and vaginal rejuvenation.

“Every other treatment we do is nice. This is kind of life-changing,’’ he said of diVa, which treats vaginal changes caused by childbirth and menopause, as well as the result of hysterectomy or chemotherapy.

It is a fractional laser that creates microscopic holes in the skin, causing new skin tissue to form, says Hart, adding that there is minimal discomfort during the procedure.

As for the latest in cellulite treatment, Cellfina is the treatment of choice, Hart says.

“Most current treatments are snake oil,’’ he said. With Cellfina, tiny needles penetrate the skin and cut the fascia, or bands of connective tissue around fat, that cause those cellulite dimples.

It’s minimally invasive, and results are said to last up to three years.

Another new-fangled treatment VicPark offers is CoolSculpting, a non-surgical alternative to liposuction. It works by freezing fat cells in areas where diet and exercise haven’t been effective. The fat cells are destroyed and the fatty deposits disappear over a period of 30 to 90 days. Bye bye, love handles!