About that dress: Sophie Trudeau in Lucian Matis

About that dress: Sophie Trudeau in Lucian Matis 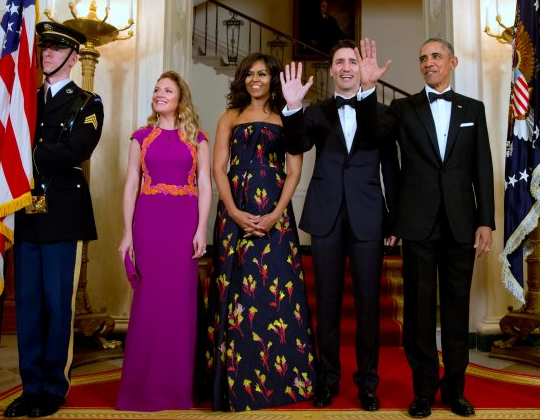 She glowed, the gown did not.

The gown Sophie Grégoire-Trudeau wore to Washington’s state dinner Wednesday night could have – and should have – been better.

In her highest profile appearance yet, Grégoire-Trudeau chose to wear a purple gown embroidered with orange and pink floral details by Lucian Matis.

It was underwhelming. The embroidered suspenders and belt were mere decoration, rather than interesting structure. It was a simple cap sleeve gown, a touch too covered up for the occasion. No, we didn’t expect to see Sophie in a deep plunging gown as is standard on the red carpets today, but even Michelle Obama wore a strapless gown by Jason Wu – raised in Vancouver – with a modern folded structure.

The Matis gown lacked drama and sophistication. And while Grégoire-Trudeau glows in just about anything she wears, this did not especially flatter her.

Surprisingly, Grégoire-Trudeau wore another dress by the Romanian-born Toronto-based designer during the day, a red crew neck with surprising fuchsia floral print insets. That was a dramatic dress, but perhaps just a bit much for daytime wear. And those lavish florals are a signature for Matis, and might have provided just the drama needed in a state dinner gown.

Duy’s travelling suit was a better choice for Grégoire-Trudeau, with its subtle sandy colour – she has often worn pale colours and they do flatter her. Of course, a suit is a tried and true uniform, a classic, without the variation and room for disaster that makes watching events like red carpets such a blood sport.

But to give credit where credit is due: Grégoire-Trudeau is putting the spotlight on Canadian design.

Vanessa Friedman in the New York Times called the dinner a catwalk for Canadian fashion. And Robin Givhan, in the Washington Post, wrote an article headlined “Yes, Canada has fashion designers, and the first ladies wore them to the state dinner.”