Quality and craftsmanship: those are the pillars of Italian fashion we all know and talk about. But a visit to Eleganza, the new exhibition at the McCord Museum, also shows off the glamour, elegance, romance, whimsy and frequent funkiness of Italian fashion.

For glamour and elegance, look no further than Tom Ford’s plunging, slinky white gown for Gucci – or anything by Gianfranco Ferre – including a classic black and white photo by Gian Paolo Barbieri.

For romance, and among my favourites in the show, there is a deep burgundy velvet coat with lavishly gold embroidered collar by Romeo Gigli. And a gown of darling red rose embellishments by Giambattista Valli.

For funky, look to Marni with an oversize suit of honking huge crystals (subtly black, it must be said) or Versace, with a fringed leather cowgirl suit.

For whimsy, two centrepieces in a stunning runway display stand out: a Capucci gown of giant swirling fuchsia and emerald flounces as well as a Valentino by the current designers, Maria Grazia Chiuri and Pier Paolo Piccioli: It’s an extravagant gown of bronze embroidery with a rhinoceros motif. As V&A curator Sonnet Stanfill says: the piece marries the craft of couture with whimsy. And speaking of whimsy, let’s not forget Pucci, with a playsuit on a mannequin on a Vespa.

Organized by London’s Victoria and Albert Museum, Eleganza: Italian Fashion from 1945 to Today traces history of la moda Italiana from the craft of the neighbourhood dressmaker to the rise of names like Armani, Gucci, Prada and Versace. 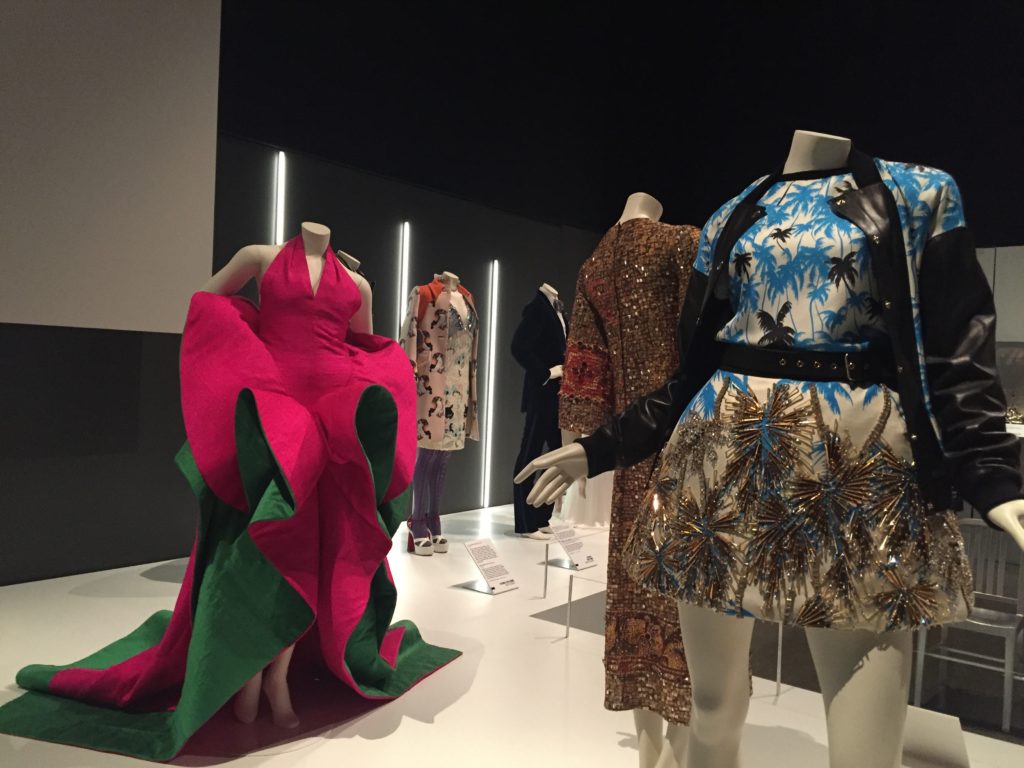 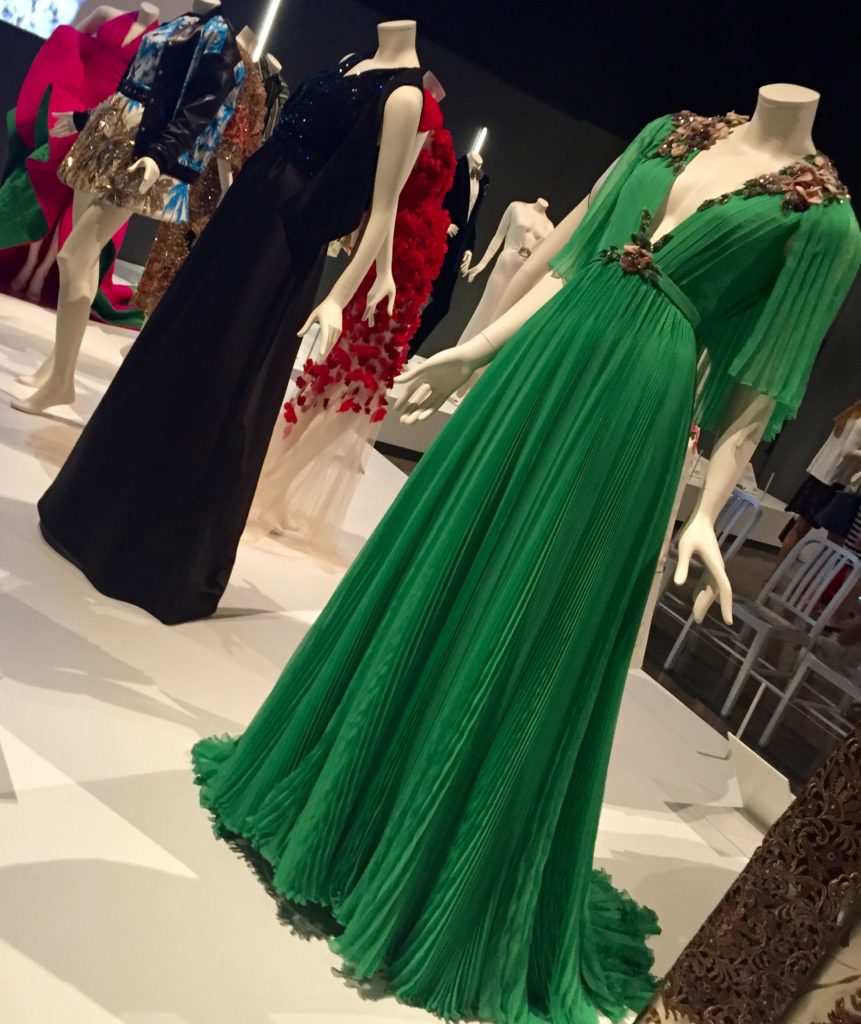 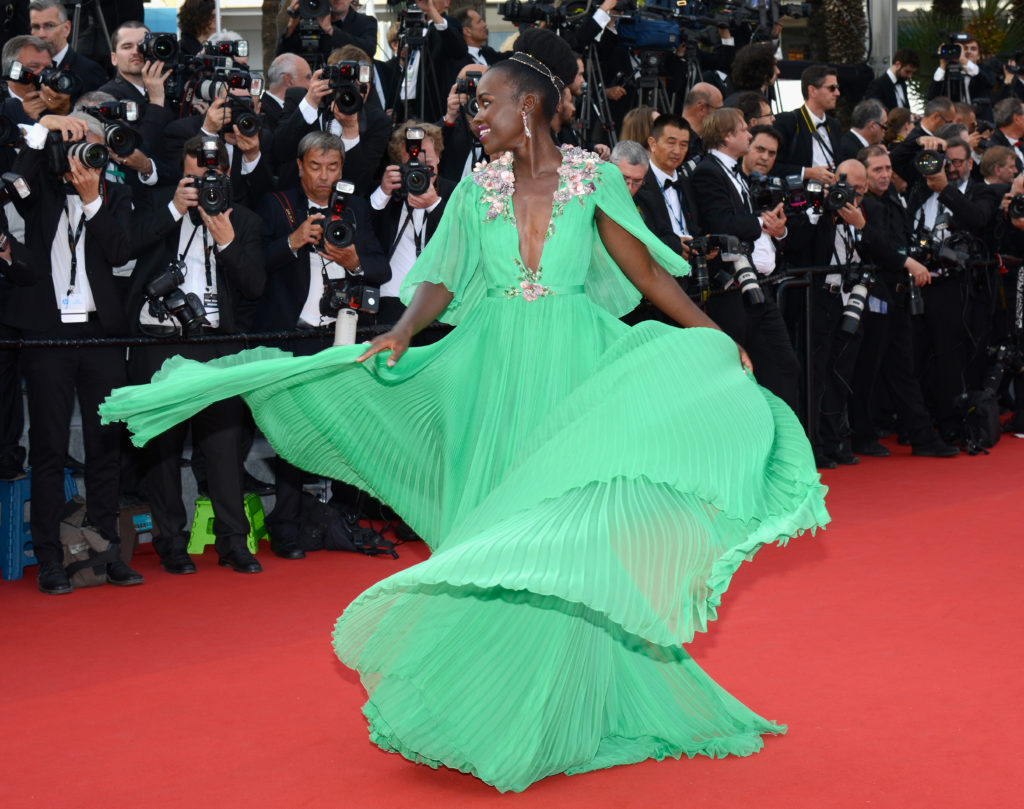 Quality and craftsmanship runs like a thread, says Sonnet – pardoning her pun – through the exhibition. One of many pieces that amaze on that count is a Fendi coat for fall/winter 2000/2001 by Karl Lagerfeld. From a distance, it appears to be wool patchwork – it is in fact, fur intarsia.

A pivotal point for Italian fashion came in 1951, when Giovanni Battista Giorgini organized the first fashion show to be presented to buyers from abroad. And one buyer at that very first show was a Montrealer: John Nixon from Morgan’s – and curators are desperate for any information about him. (Readers, be in touch if you have any details.)

The following year, the show moved to the glittering Sala Bianca at the Pitti Palace in Florence.

Stanfill said there was a lot of animosity from the French when the Italian shows started up.

She recalled a quote from Pierre Balmain: “Let the American buyers go play with baby bonnets in Italy. They’ll come to Paris for their real fashion.”

So there was this sense that the Italian designers were dabbling, but there was this focus on textiles – there was a lot of commentary at the time about the quality and inventiveness of the textiles, Stanfill said.

“But also, in the ‘50s, Italian couture was a third cheaper than the French.”

Asked how Italian fashion differs from the French, Stanfill said it depends on the decade we’re look at. Today, she said, “The Italians are little less formal than the French. There is a sense of being at ease in your own skin.”

More marvels to seek out:

1955: An empire gown with puffed sleeves by Gattinoni worn by Audrey Hepburn in War and Peace.

2015: A custom Gucci of green silk with crystal and floral embellishment worn by Lupita Nyong’o to the Cannes Film Festival.

The exhibition runs May 26 to Sept. 25, 2016, with extended summer hours at the McCord Museum. Films, conferences and a contest with the winning prize (worth $7,000) of a trip to Italy and a shopping spree at Holt Renfrew are on offer as well. Click here for details. 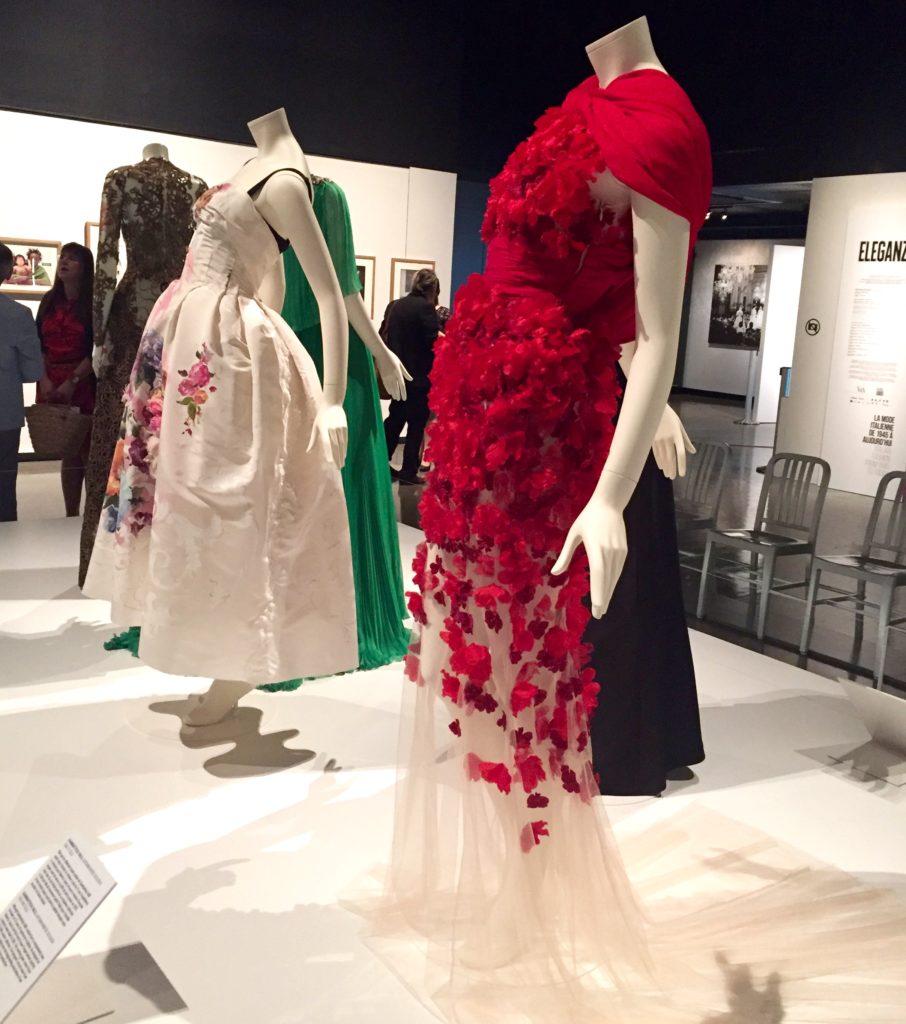 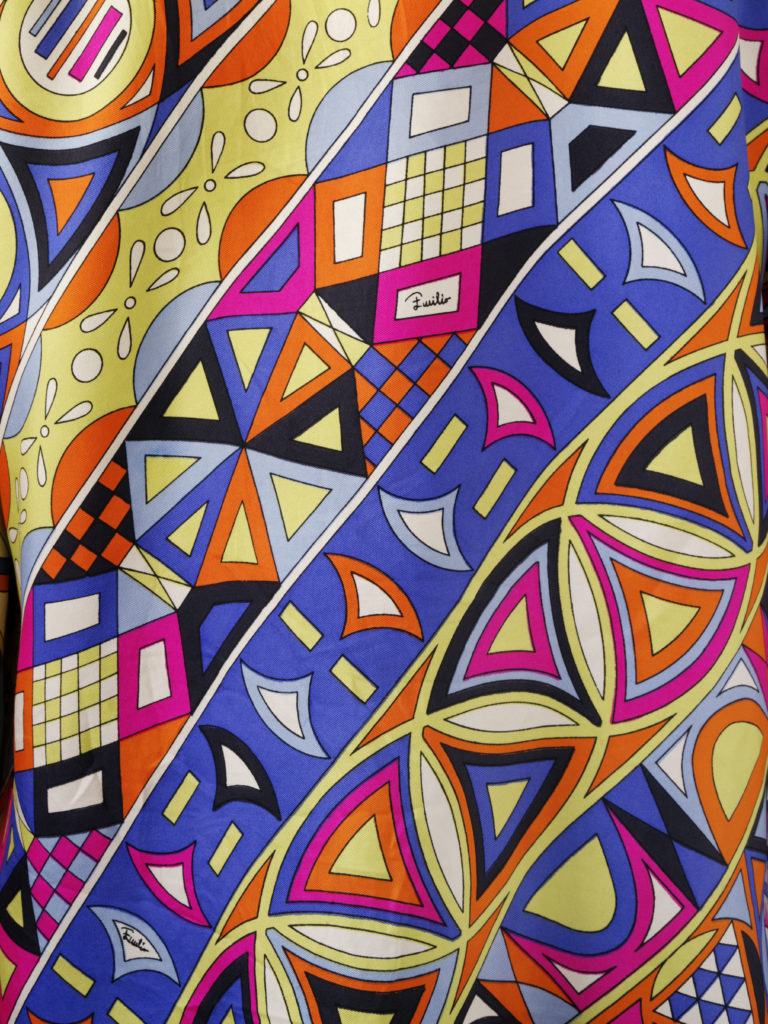 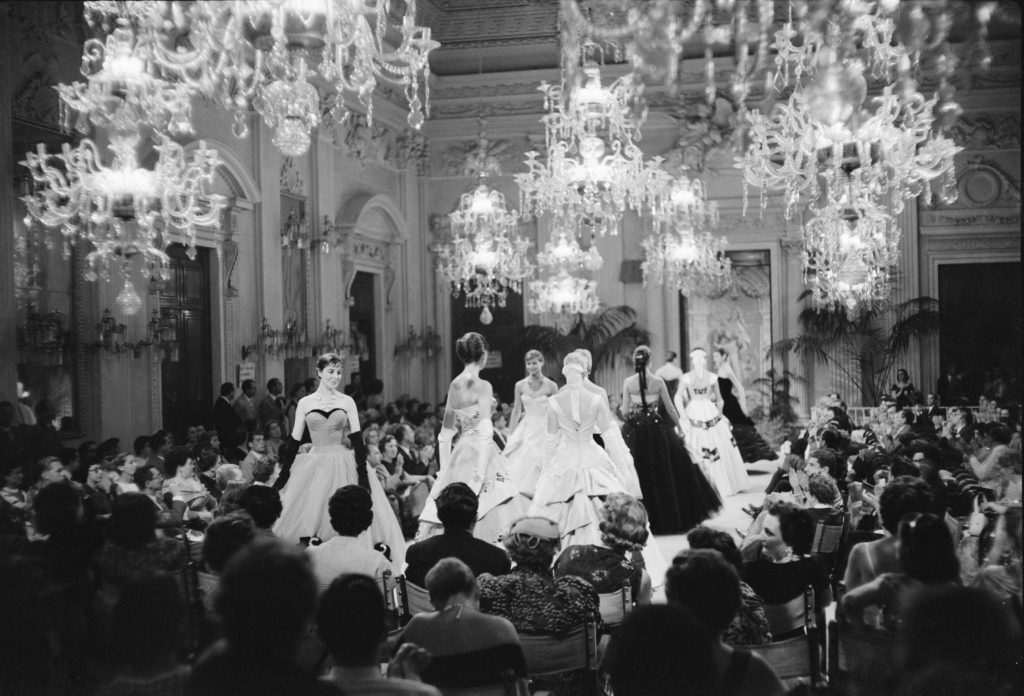 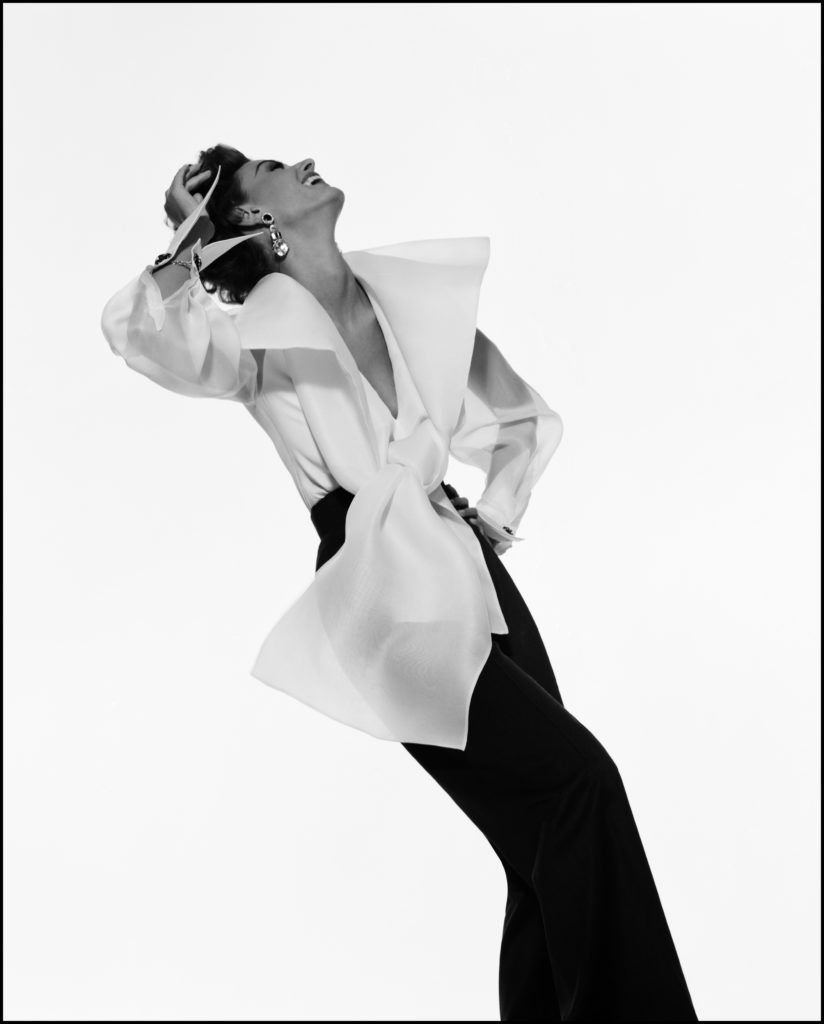 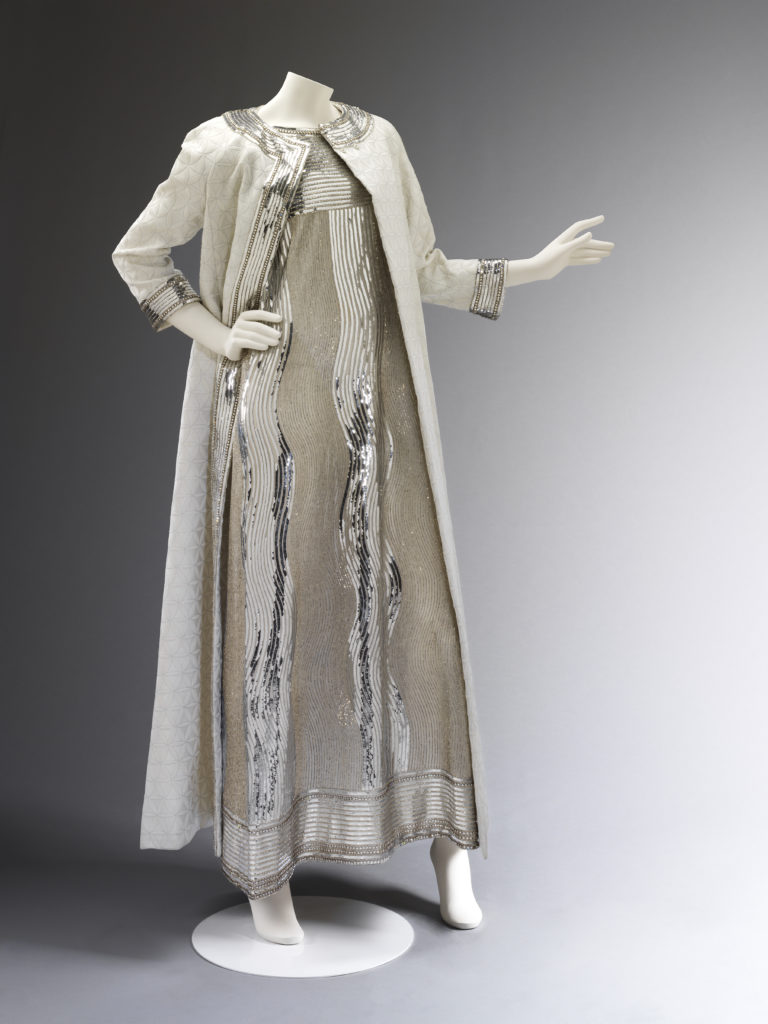