Expo 67: one square-toed pump in the past, a giant fashion leap forward

Expo 67: one square-toed pump in the past, a giant fashion leap forward

It’s a given that Expo 67 was the dawn of a bright new era for Montreal, a beacon to the future – in fashion, arts, architecture, technology and society in general.

But it might come as a surprise that much of the fashion on display at Fashioning Expo 67, the new exhibition at the McCord Museum, was firmly mired in the old days of gloves and stockings and little hats and suits for the “ladies,’’ personified by the thousands of young women who served as hostesses at the 1967 Montreal World’s Fair, titled Man and his World.

“There were a lot of fresh, young ideas at the time, and youth was on the way to becoming the main source of fashion inspiration,’’ said Cynthia Cooper, curator of the exhibition. “But in ‘67, it can still be a bit surprising to see there were some very conservative ideas out there. And we see them in many of the hostess’s uniforms – (which were) a bit more Jackie O.

“Some pushed the envelope, but some came from the conservative vocabulary of clothing.”

Jackie O suitings and gloves aside, there is one aspect of the exhibition that is exhilaratingly modern: a video and some garments from the weekly fashion show called Caper, produced by Iona Monahan, the late fashion editor (and my predecessor at the Montreal Gazette).

Models on roller skates wore psychedelic-print caftans, jumpsuits and flower-power minis that would play today. Youthquake was on the way, despite the prim uniforms by designers such as Serge & Réal, Michel Robichaud, and Marielle Fleury, all of whom give interviews that interested viewers can watch at individual video stations.

“For the designers that were working then, there was the feeling that anything was possible,’’ Cooper said. “There was really a feeling, in their careers or their creative practice, that the world had opened up to them.”

Some garments to check out in the exhibition:

Check them out in the video of the Caper show, but also there are at least two on display, one that was actually worn by a visitor to the exhibition, and another designed by Michel Robichaud for Mme. Drapeau, a favourite piece for Cooper. The designer made the dress a gown; the mayor’s wife had it shortened. 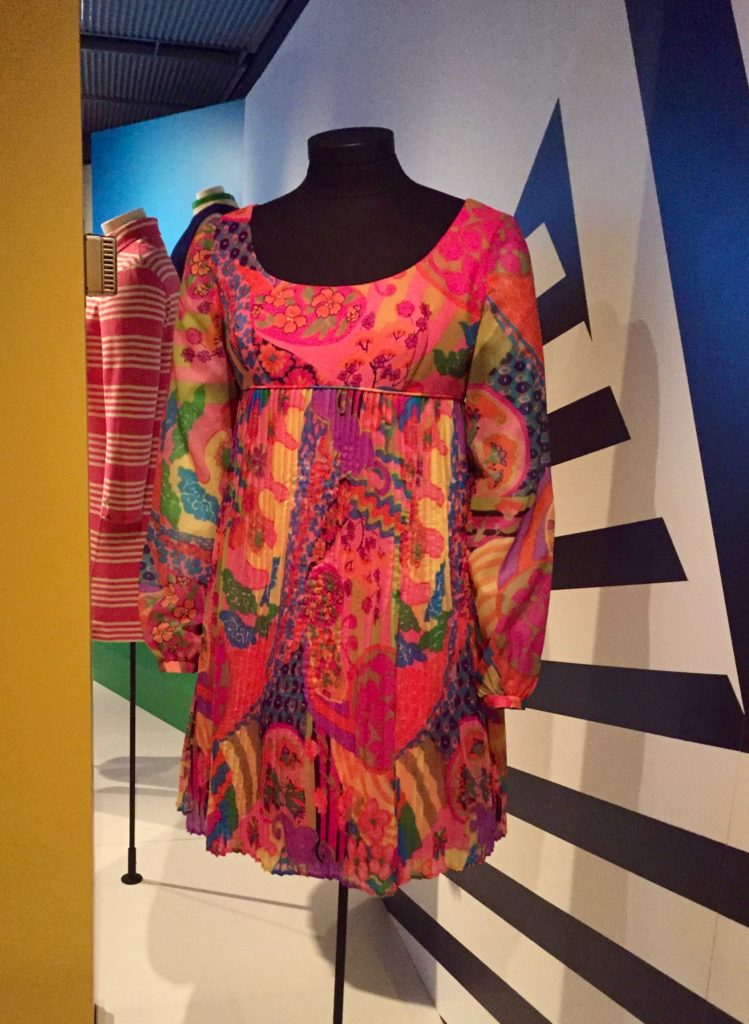 On display at the McCord Museum, this dress is described as typical of some shown on the Caper runway. 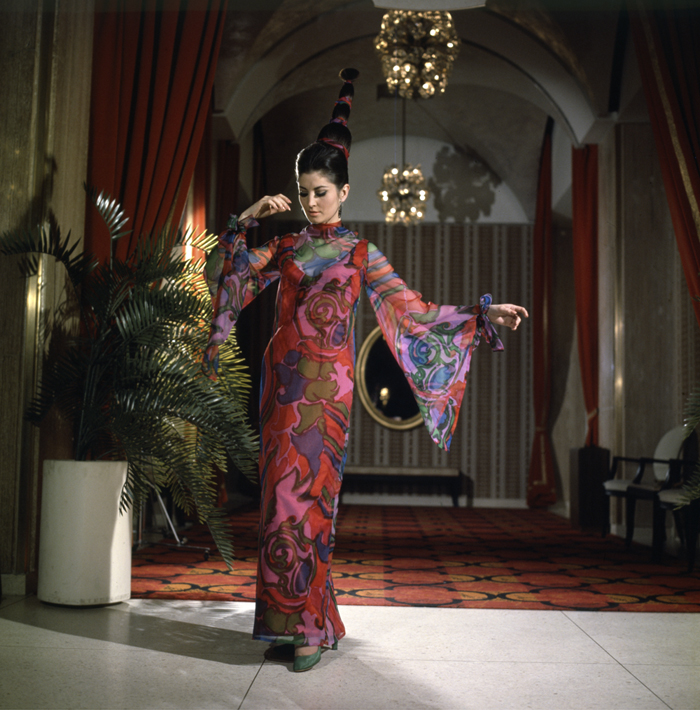 Evening dress by Michel Robichaud, Published in Week-end Magazine 1967. Bert Beaver © Government of Canada. Reproduced with the permission of Library and Archives Canada (2016).

Back in the day, Algo was a major manufacturer of women’s dresses, one of the largest in North America. There’s a thoroughly modern little black dress with dropped waist in the show. Back in the day, my mom would take me to buy dresses at the Algo warehouse on Chabanel St. My dresses were awful: I remember a lilac number with white jabot, and a turquoise Swiss polka dot frock. 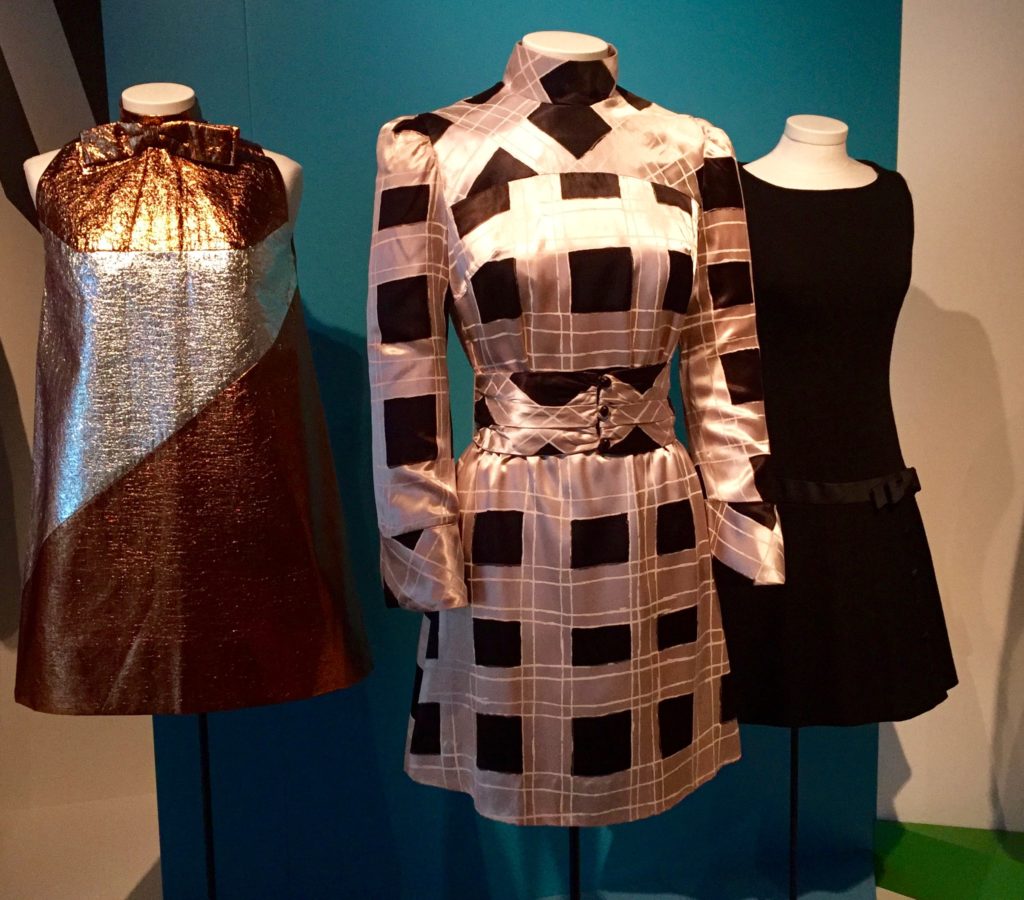 Jacques de Montjoye’s dress, shown at a couturier’s’ association show, was a reference to the emerging sense of a distinct Quebec identity. 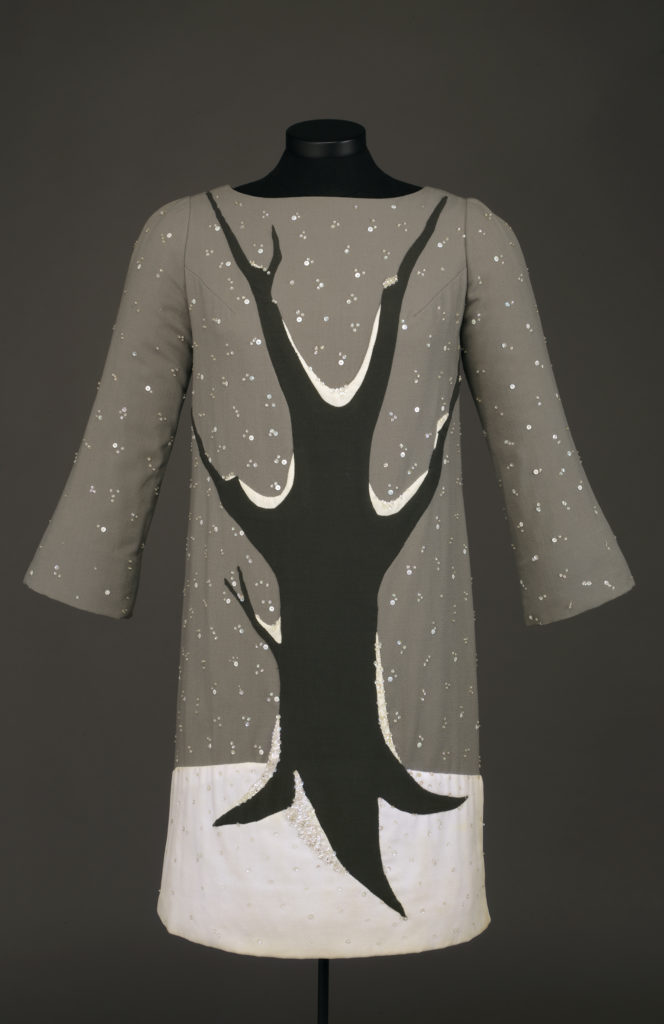 Marielle Fleury’s orange woven suit is shown in the exhibition with credit to the weaver, Lucien Desmarais; I prefer her silk batik piece, which could easily be worn today. I also loved the photo shoot images, taken as part of a European tour to promote Quebec design. The silk batik dress was among the pieces pictured, either in the swinging style of the day or with a nod to the age of couture. 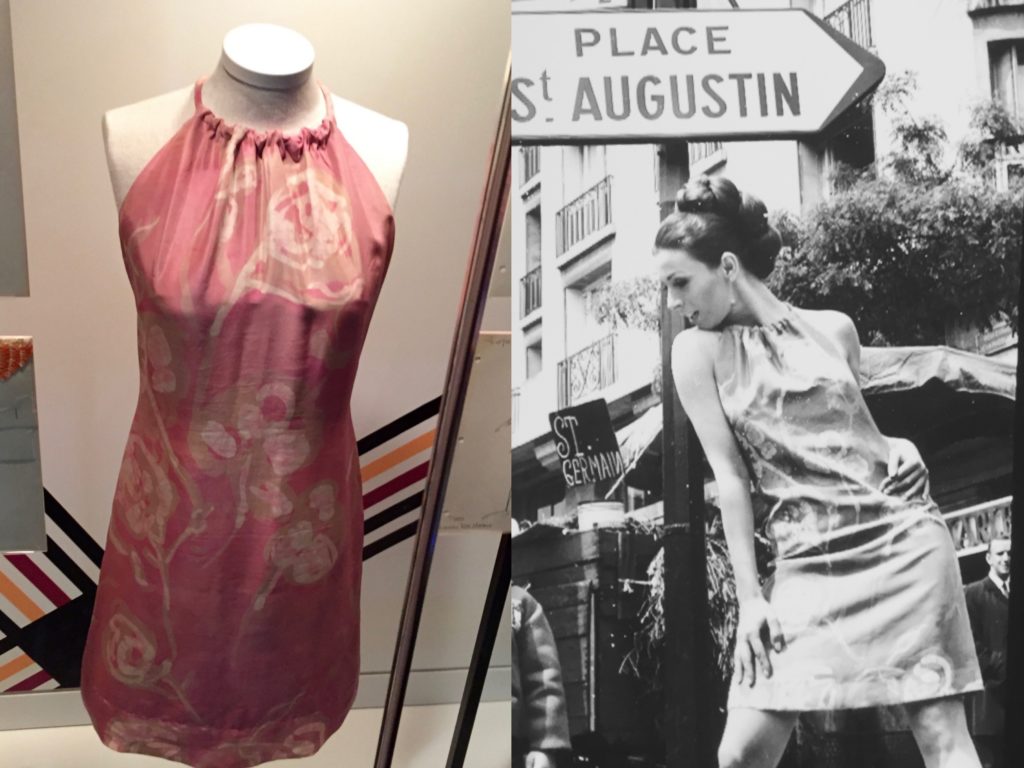 Marielle Fleury’s silk batik halter dress, as shown at Fashioning Expo 67 and shot in Paris as part of promotional campaign for Expo and Quebec fashion.

Designed by Serge & Réal, John Warden and Michel Robichaud chez nous, the outfits recall that decorous age of dressing before Youthquake. Bill Blass, Roger Nelson, and John-Louis Scherrer were designers for hostesses at the U.S., British and French pavilions. 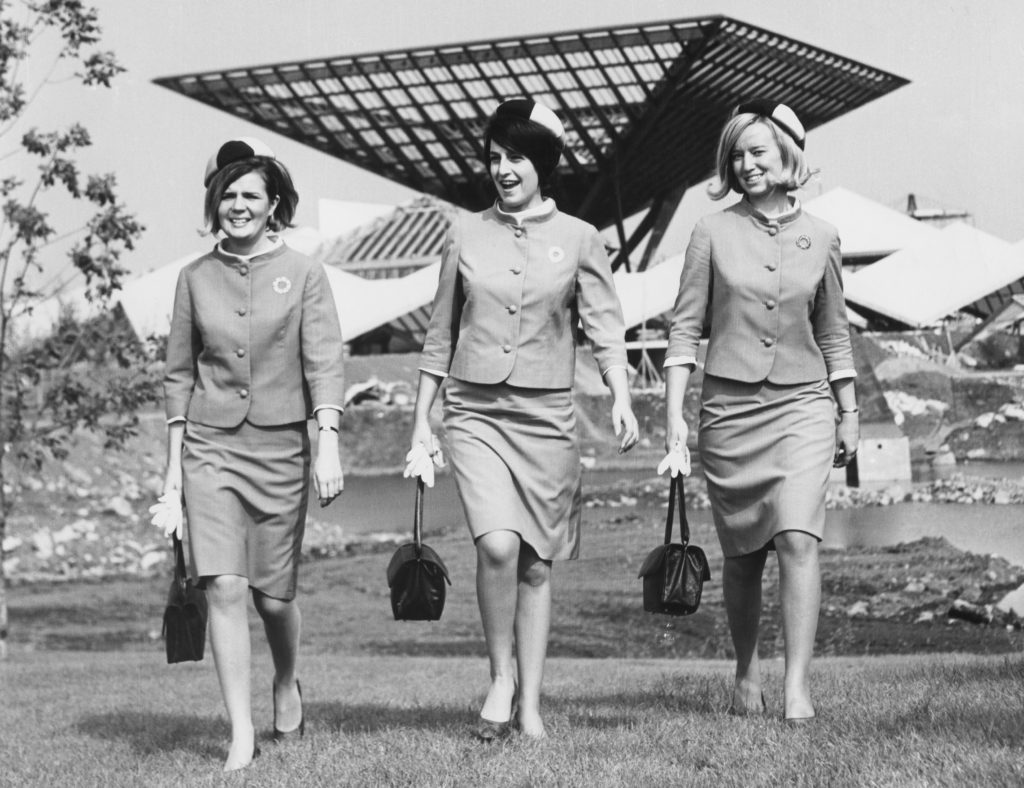 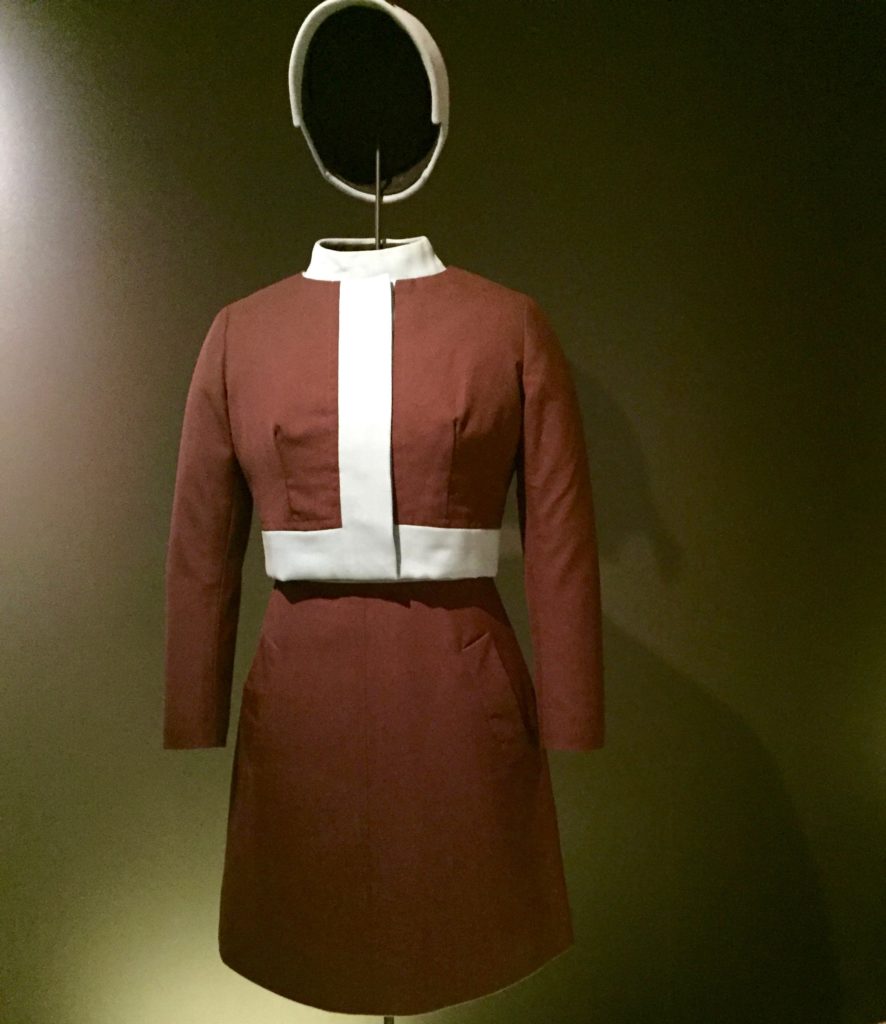 I leave you with this: me at Expo, in an outfit that is not bad for a kid – if I do say so myself. Some years later, I was wearing go-go boots and lime green elephant pants, from Le Château, if memory serves. 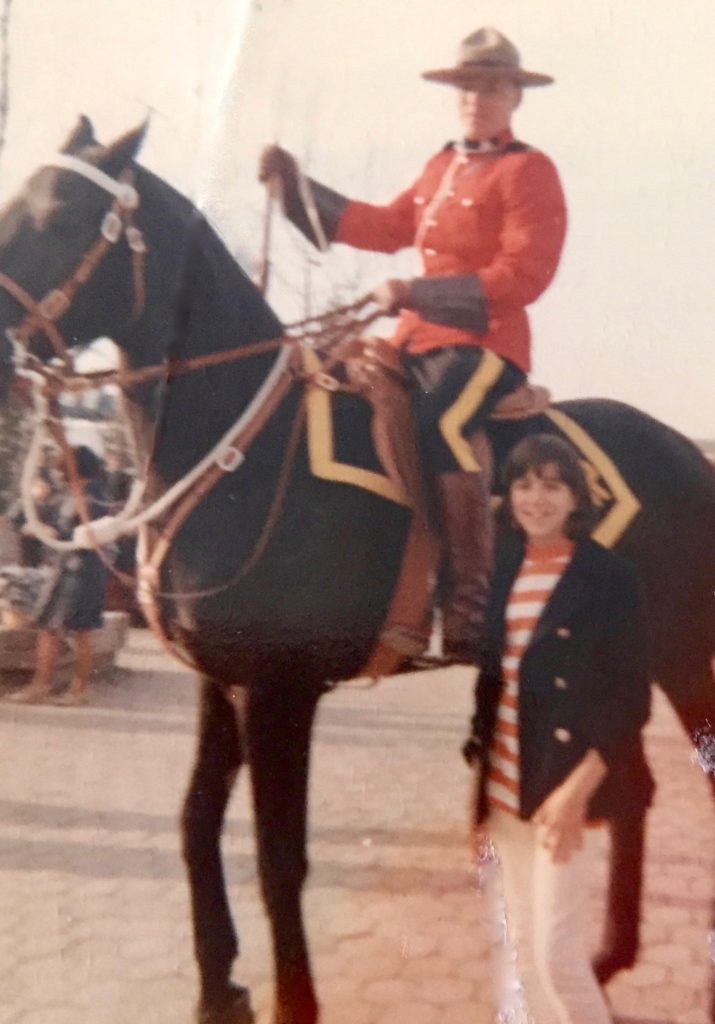