I called them the leatherbacks, a couple in their late 70s, maybe 80s, who hit Playa Norte on Isla Mujeres every afternoon with paperback books. They spread a blanket by the water on the bustling beach, in front of the rows of loungers and parasols. He wore a plaid shirt to ward of the sun, she just the most rudimentary bra top and bikini bottom. They sat upright, they read, and very occasionally, they waded into the buoyant blue sea. Oblivious to the heat and the burning rays, they did not seek shelter from the sun at all, and their skin was the colour of toffee, with the texture of dry, lined, aged leather. 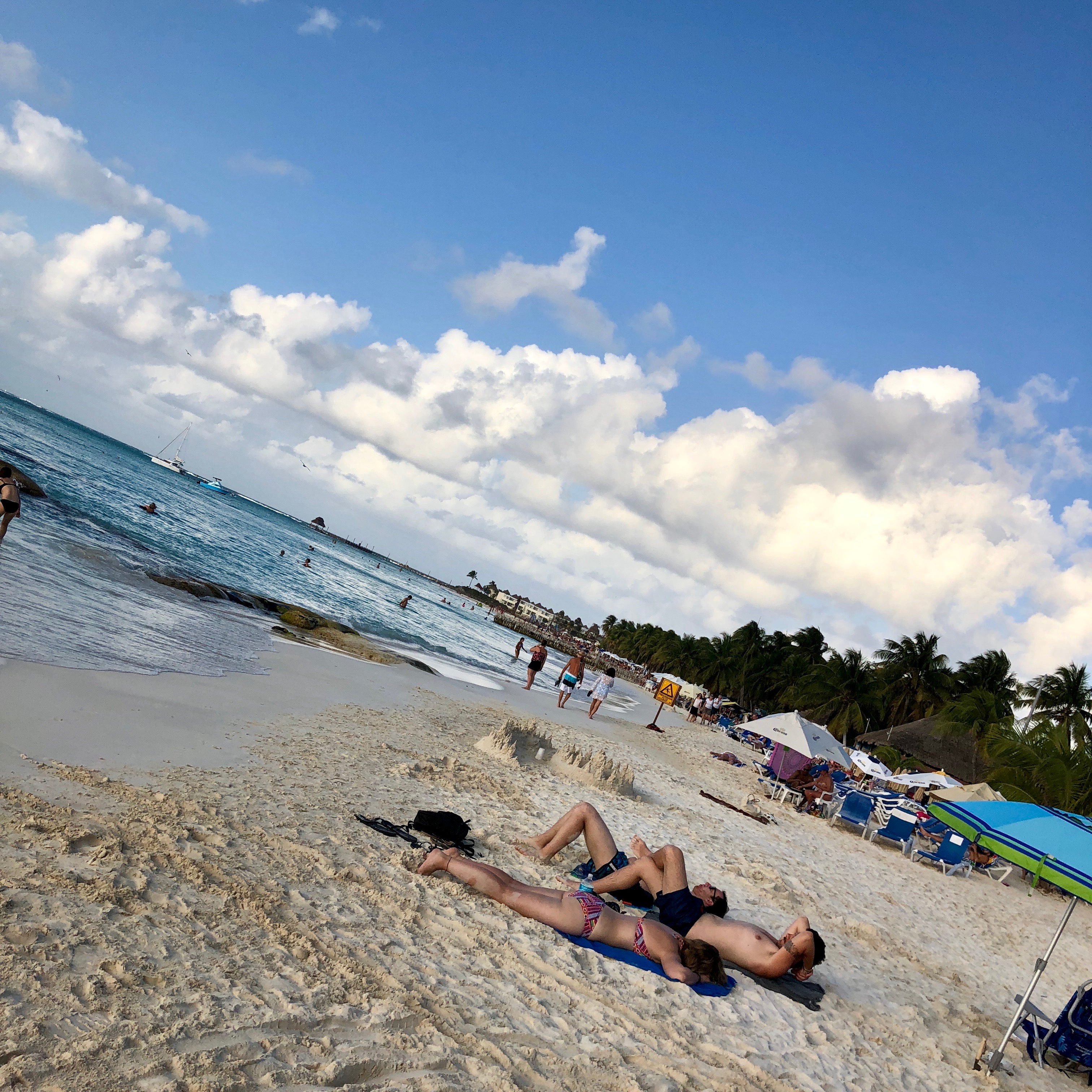 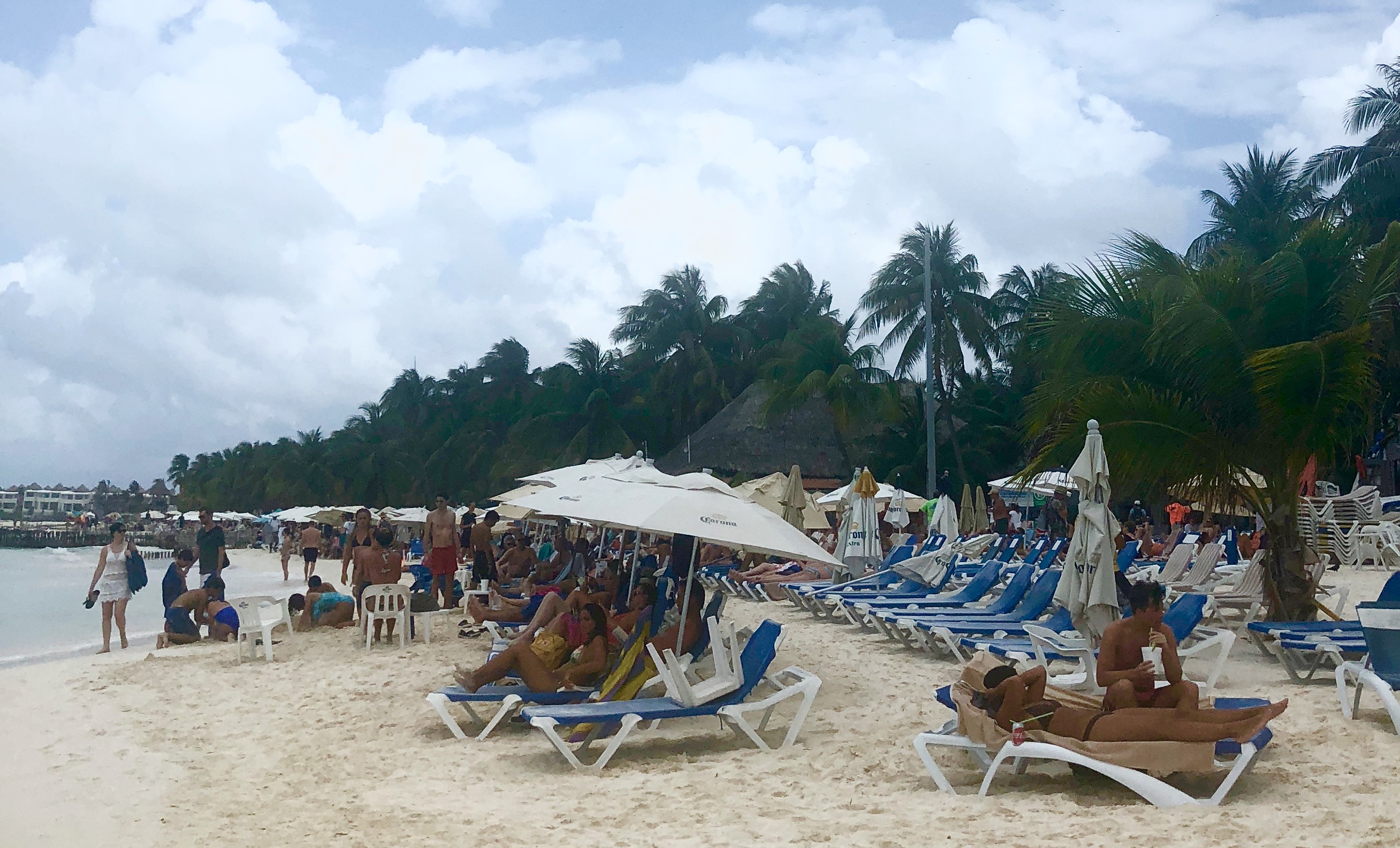 They were among the fascinating, often annoying, fauna on the beautiful northern beach of Isla Mujeres, just off the coast of Cancun. With beach chairs and umbrellas lined up in unruly rows, our portion of beachfront was peopled by an unreasonable number of gregarious, beer-swilling Texans and polluted by noise from the beach bars. College kids with tattoos and boom boxes would ply the beach, adding to the cacophony, and early in the day, the chair-keepers would run to try to rent their wares to every passer-by. All day long, touts would walk the beach, peddling everything from ice cream to pareos and hair weaves. Most colourfully, and tragically, perhaps, were the Tzotzil women from Chiapas, who wore their brilliantly hued crafts as headdresses and arm candy. I took a picture of one woman, not surreptitiously, but not completely above board, and felt terribly guilty, having spent three months on a fellowship in that southern Mexican province decades ago, and knowing that they don’t take kindly to the camera. 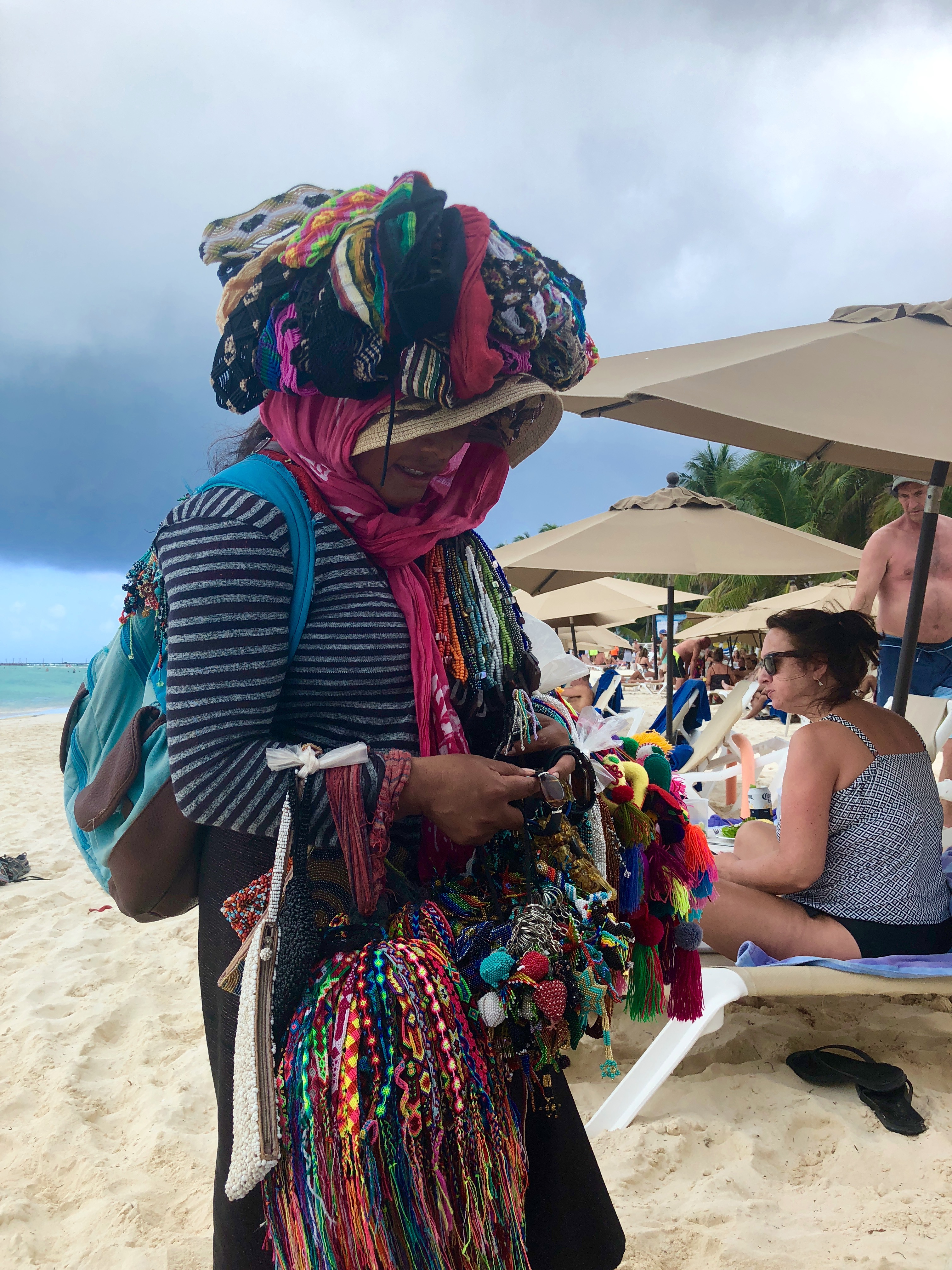 A woman from Chiapas selling her wares on Playa Norte, Isla Mujeres.

But back to the leatherbacks, whom I did not photograph. I first visited Isla Mujeres more than 20 years ago, when it was pristine and unspoiled, with just a few hotels on the beach and a charming village of white-washed homes and streets. If I had to make up a story about them – and I do – it’s that the couple came to the island many years ago, when it was a haven for hippies, and stayed.

After my one-day sojourn all those years ago, I dreamed of returning. And after years of visiting Tulum, and watching it spread into the tourist mecca called the Riviera Maya, with its all-inclusives and $1,000-a-night boutique hotels, this year it was time.

What a shock awaited me.

The first night on the island, walking the chaotic, crowded main pedestrian street, Calle Hidalgo, I wanted to get right back on the boat to go somewhere else, anywhere. Music – again – blared from the restaurants, hundreds of them, offering the usual mash of pizza and pasta. Sandwiched amid the restos were tourist shops, naturally. Most featured handicrafts from Chiapas, particularly the brilliantly hued textiles of the indigenous women. In each shop, there were thousands of little embroidered pouches and pillowcases, and miles of beautiful runners – making me wonder how so much production was possible, and boggling my mind because the choice was so great. A weekend craft fair on the main square was also peopled by Chiapans, offering trinkets and textiles. I left the island without a single souvenir. 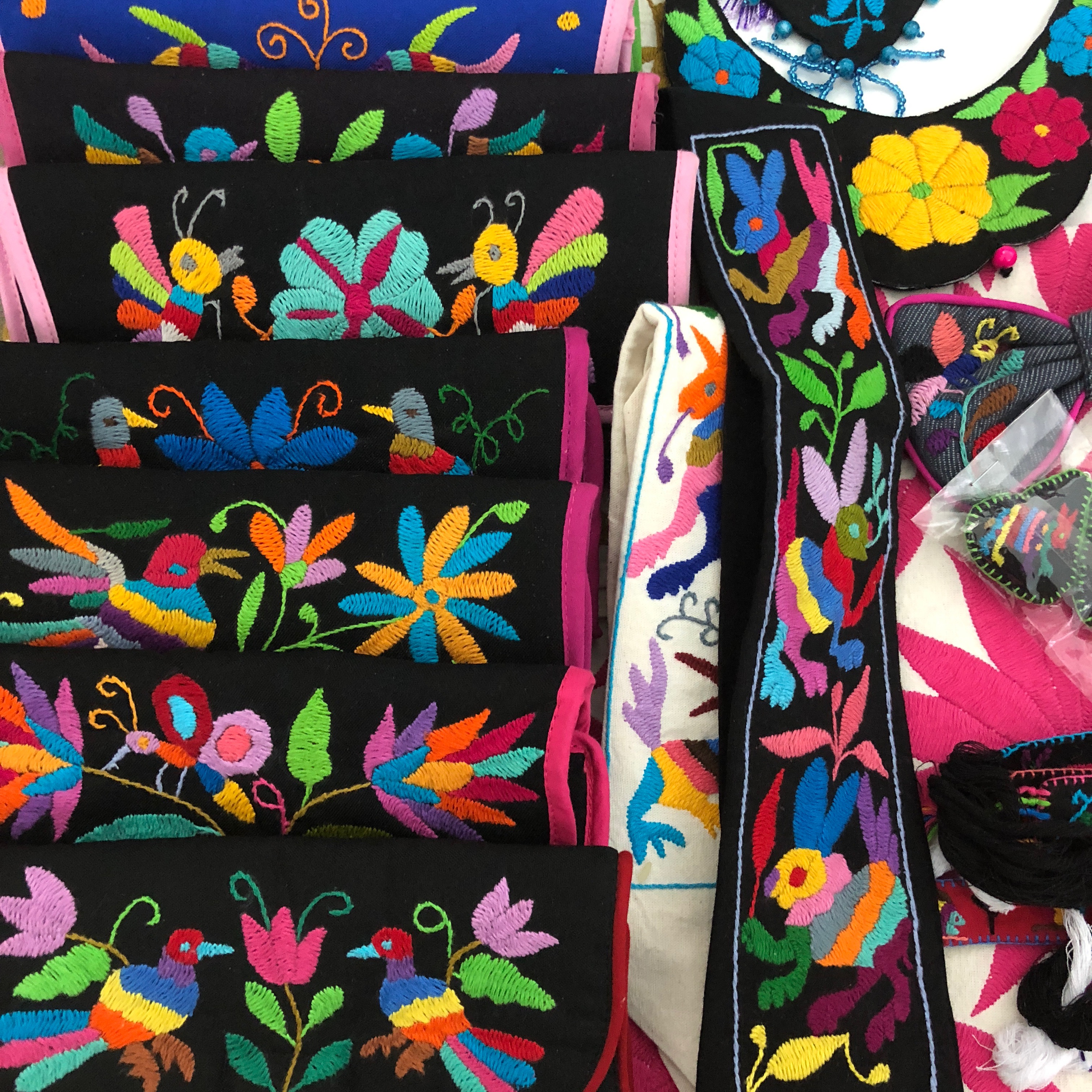 Textiles from Chiapas at a souvenirs shop on Calle Hildalgo, Isla Mujeres. 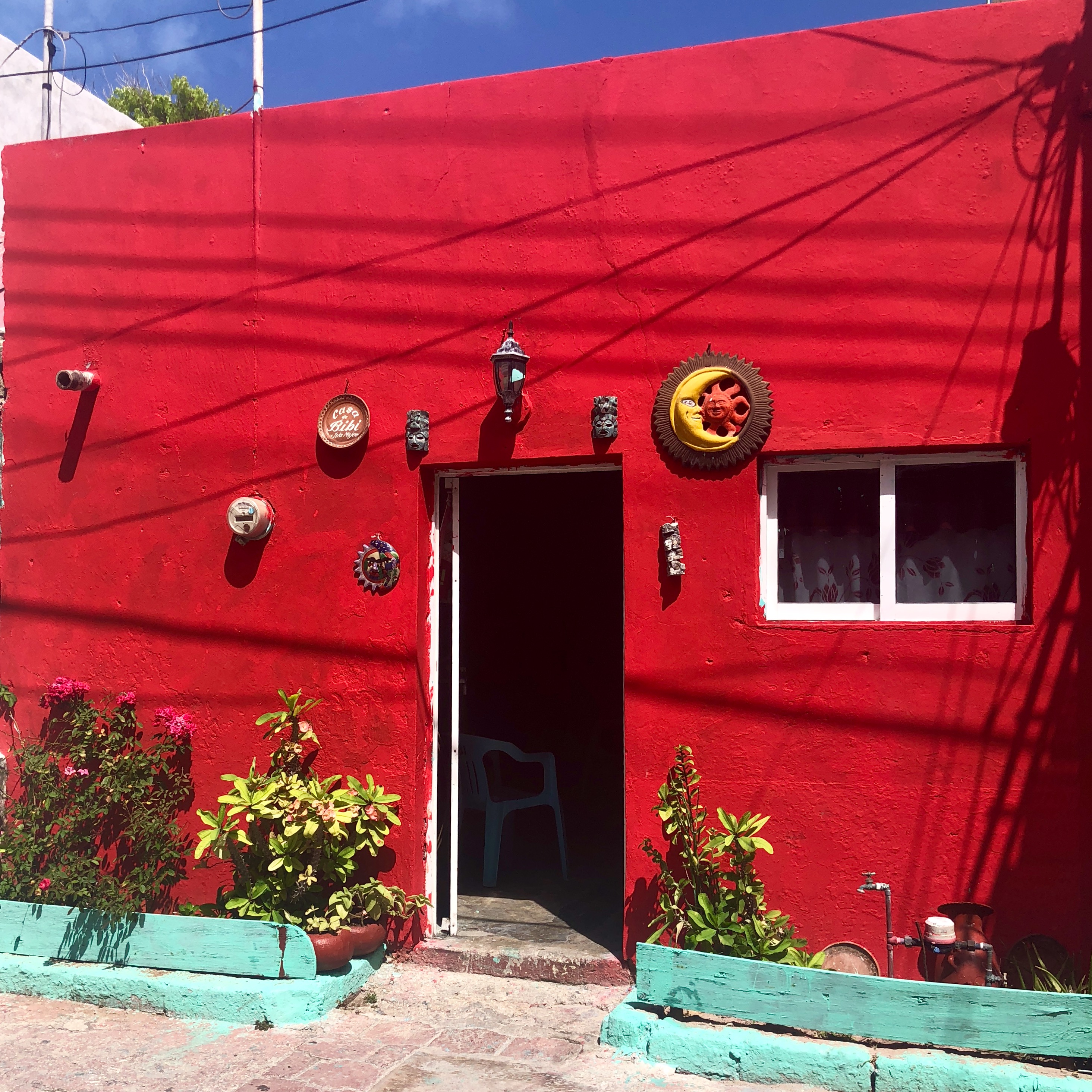 Colourful homes off the main street on Isla Mujeres. 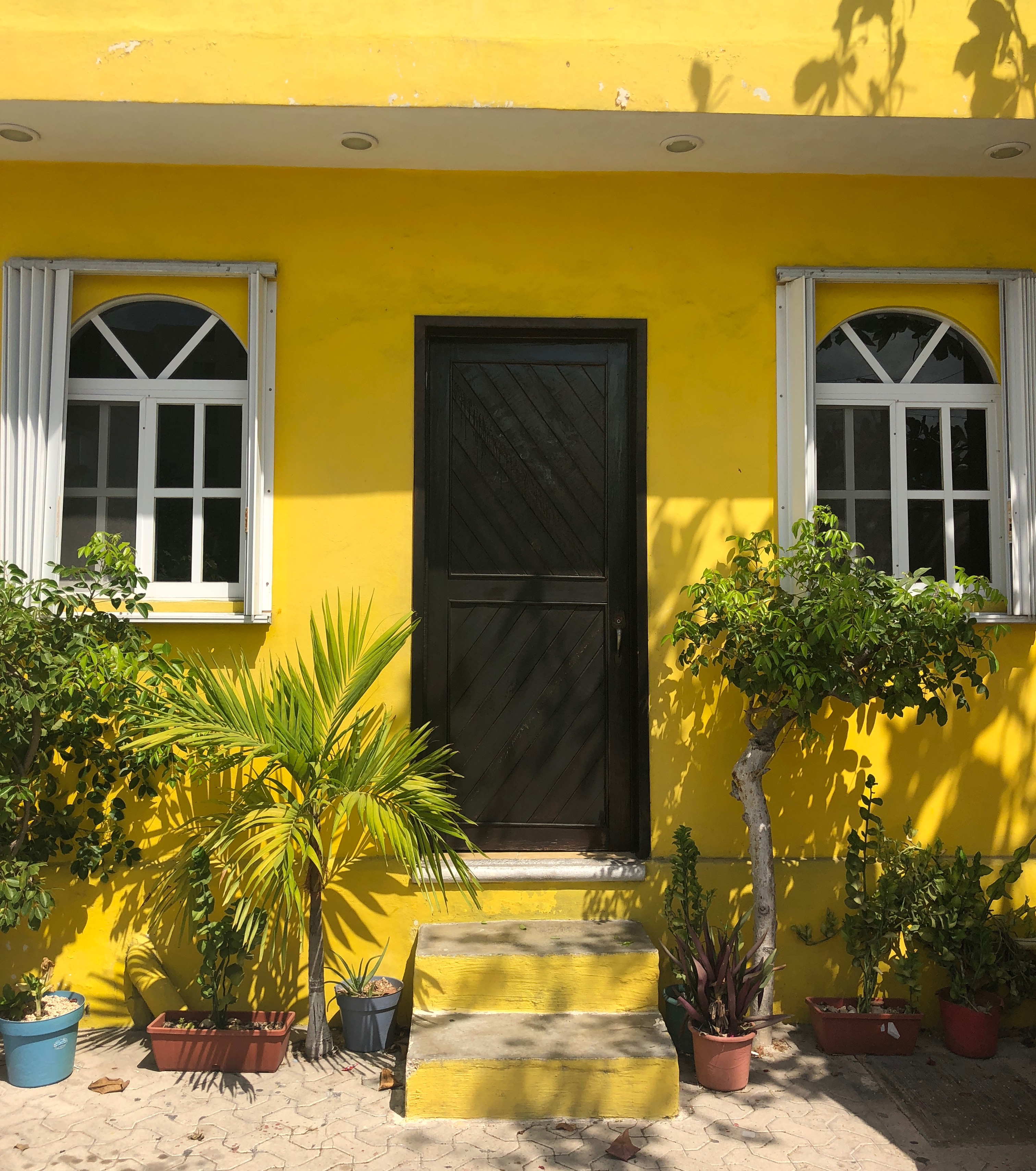 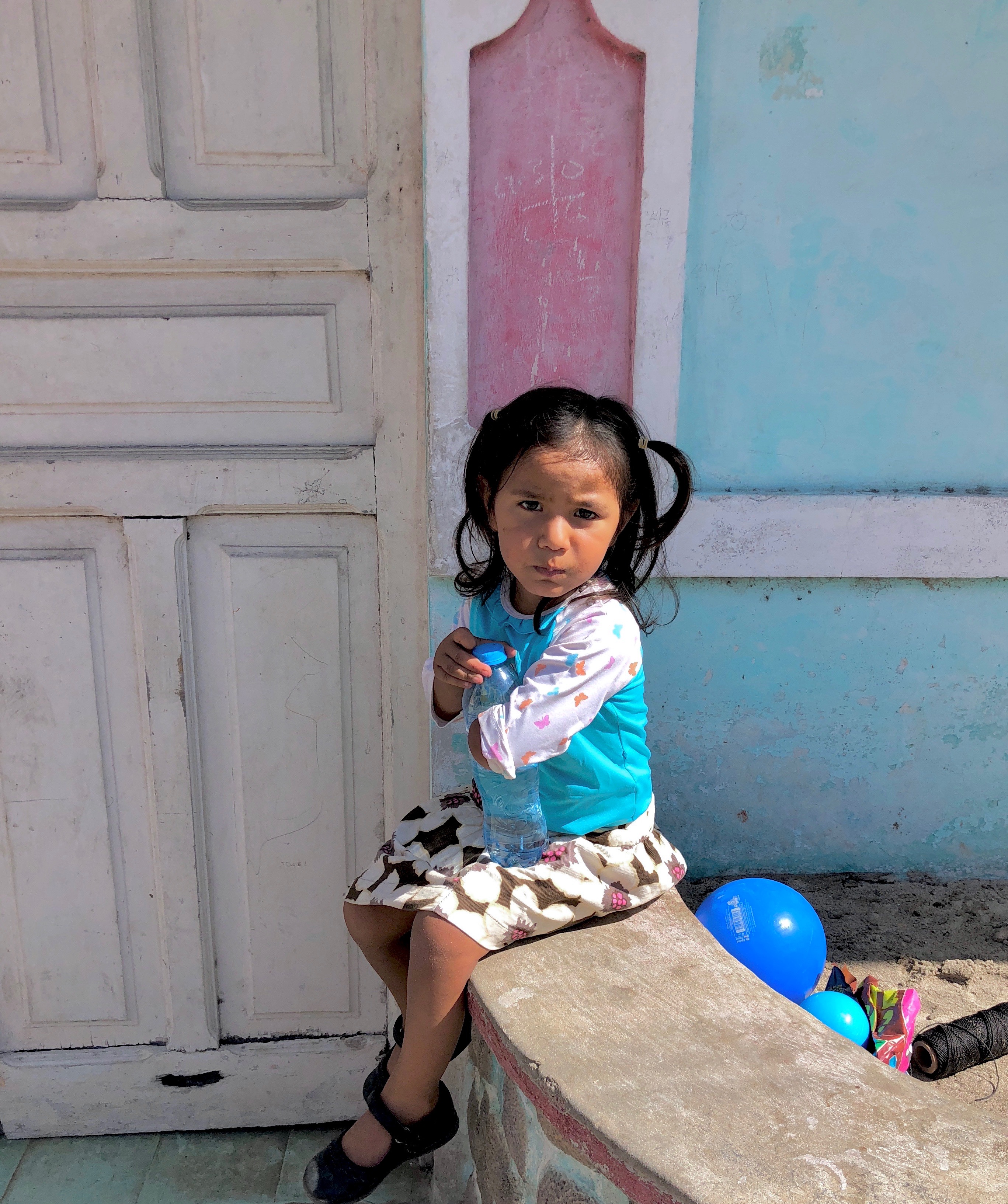 A young inhabitant of Isla Mujeres.

It did get better. Off the main drag were charming streets of colourful little dwellings and shops, and funky to fine restaurants. We tried the fish with couscous at lovely Olivia, offering Israeli-Middle Eastern dishes in a garden setting; Peruvian hidden gem Amar, known for its delish ceviche – which we did NOT have; and lively North Garden for breakfast, where they were sadly OUT of the lobster tacos! We dared not try the fish restaurants on the seafront boulevard, the Avenida Rueda Medina, as they showed every sign – garbage on the sand, cats prowling – of being unsanitary tourist traps.

More dining misadventures: I had a hurricane-force cold on the evening of our big splurge at the Marbella Fish Market and Raw Bar, on the south end of the island near the Ixchel temple ruins. I could not taste a bite of the delicate grilled fish. Milos on the Caribbean, and I could not appreciate a thing, not even the sunset on the sea. Well, maybe the coconut shrimp were tasty enough to get through my sniffles.

We changed hotels during our one week on the island, the result of bad planning. (Don’t ask for details. It had something to do with a wedding at the hotel I had spotted and wanted to stay at 20 years ago, which turned out to have awful reviews on TripAdvisor.)

So our first five nights were spent at Playa Arena, a grouping of basic cabins right in the heart of the action at Playa Norte – and right off the best swimming area on the beach. The water was heaven, just the right temperature with gentle waves and a sandy bottom so you could swim to your heart’s content.

Our room was spacious, clean and comfortable, with quiet air conditioning, a good fan, small balcony and a kitchen, allowing me to live on coffee, oranges and avocado for the day. (My cold killed my appetite and my poor travelling companion was starving.) Then we moved to a swisher pad, the Hotel Secreto, which boasted a huge private balcony overlooking a chilly lap pool and the tempestuous Atlantic Ocean. It was right on the beach, but for some reason, we were not told how to access it from the property. It was secreto. 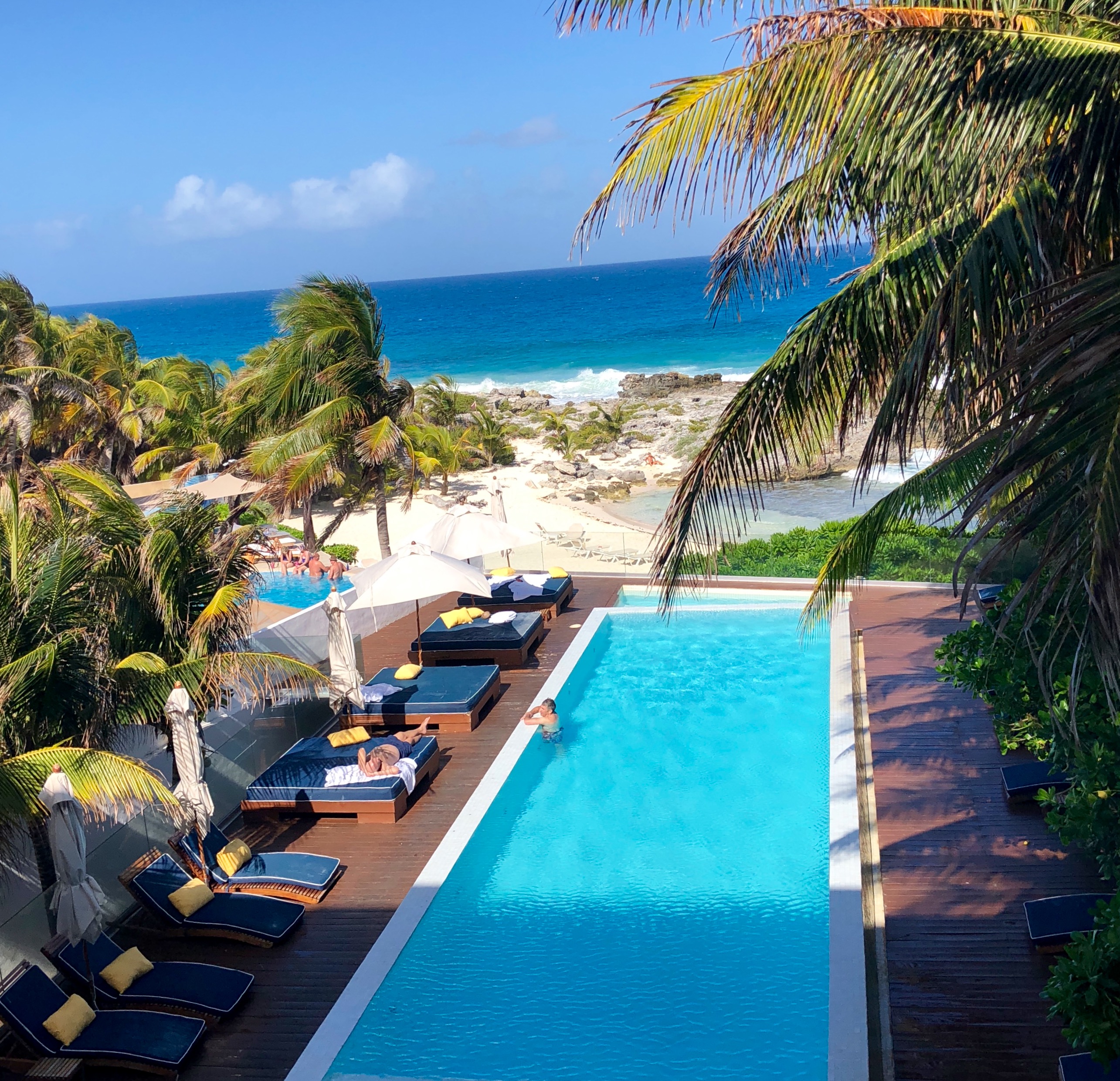 The view from our room at Hotel Secreto, Isla Mujeres.

Despite the dread at moving – I am not a light packer – the move offered a welcome relief from the hustle of Playa Norte, and made the week seem twice as long.

Good thing? Despite my nitpickings – Yes!